For more than seven decades (and counting) the Schneider Male Chorus has been bringing an enjoyable, high-quality sound to the residents of Waterloo Region and beyond. With strong roots in the Kitchener-Waterloo community, the chorus has travelled, over its last 70 years, to present their strong male harmonic voices to audiences all over Canada and the United States, as well as abroad.

The Schneider Men’s Choir sprang out of a gathering at a local picnic (remember them?) for employees of the J.M. Schneider Meat Packing Co. in 1938. The all-male chorus, with the encouragement and support of the company president and owner, Norman C. Schneider, was officially founded in 1939 – and began to perform throughout the community and the province, growing in both numbers and strength of performance.

During the war years, the choir was actively involved in wartime fund-raising events in the twin cities.

In 2009, J. M. Schneider Foods, now Maple Leaf foods stopped supporting the chorus and it has been supporting itself with the help of the cities of Kitchener and Waterloo since.  Each year the chorus holds about 30 weekly practices in winter, spring, and fall seasons, perform 4 to 8 concerts in support of charitable efforts of the chorus and other groups and organizations, and perform 5 to 7 concerts for residents of retirement and long term care facilities and other requested venues.

In 2015 a sub-group of 5 of the guys plus Nancy started rehearsing some other music for fun and to entertain at the choir Christmas Banquet.  That has since grown into The Quintessentials Quintet and they have started to have bookings of their own to support the choir.

This award was created in 2007 to recognize members who provided exceptional service to the Choir.  It was named after our most faithful and longest serving member at the time, Jim Rennie.  Jim had 58 years of perfect attendance at both rehearsals and concerts and was its first recipient.  He died shortly after receiving this award.  The recipients to date : 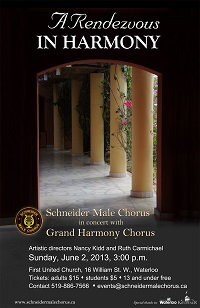 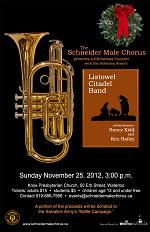 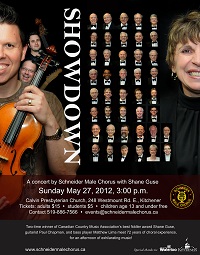 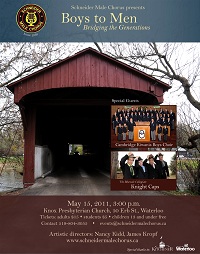 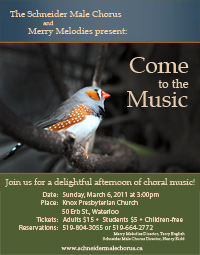 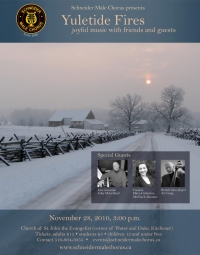